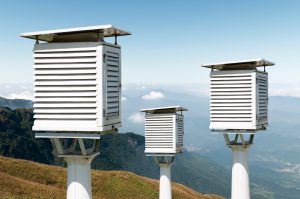 available for download on the Buy Richard’s Writing page.

‘You don’t see them often now but in my youth they were very common, especially around airfields of which their was no shortage in Britain following the Second World War. A tidy sward of grass mowed to millimetric perfection and so flat it made the average bowling green look like the foothills of the Andes. In the middle a white box with slats, to one side a thick copper pipe sticking out of the ground, a small mesh work tower surmounted by rotating cups and crowned by a arrow with a vane at one end.

By and large this lawned area is quiet. the peace broken only by the drowsy drone of bees. The smell of clover hangs thick and sweet upon the air. But just occasionally the peace is shattered by the distant roar of an aircraft engine under full power and for a second the whiff of kerosene can be tasted on the air. Eventually the roar will be supplanted by the scream of jet turbines but even then the stations remained. Tended by quiet men in baggy slacks and sleeveless cardigans, always with a tie, a notebook and a preoccupied look. For
these were the weather men and the sward of grass they tended was
home to the local weather station…’